On the banks of the River Valga, is not to be missed the Irmáns Dios Mosquera Park. It boasts a variety of gardens, a playground, picnic areas, walkways and a bathing place complete with beach, whilst amongst its various sculptures the most noteworthy is that of Agustina Carolina Otero Iglesias, better known as “La Bella Otero”, a Valga-born stage performer who became an icon of the Belle Époque Parisienne  (her birthplace stood close to the site of the History of Valga Museum).

A still carved in stone is a permanent reminder of the “Festa da Caña do País” and the “Festa da Anguía”, popular festivities that celebrate the traditional occupations of distilling brandy from grape pressings and eel fishing the last weekend of August.

Close to the town hall sites the History of Valga Museum, a stone building which exhibits several thematic areas that highlight the most relevant aspects of the history, and culture of Valga.

At Parafita the River Valga rushes through a narrow valley, jumping downstream over a series of “fevenzas”, as waterfalls are known in Galicia.

A recreation area has been built next to one of the most spectacular of these falls, with walkways and restored watermills.

A little more than one kilometer further on we come to As Laceiras, the starting point for a route leading to the “Pedra da Serpe” petroglyph, a veritable gem of the art of early rock carving that dates back to the Bronze Age.

The hills known as A Chan and Os Salgueiros are wonderful lookout points.

This Neoclassical church is located in the village of San Miguel de Valga, on the Saint Jacques Way.

Of note are its Via Crucis, the stone cross and the vicarage with its impressive stone granary and dovecote.

The village of Os Martores is home to the splendid San Mamede Chapel, built during the 4th and 5th centuries AD.

Here we can find a first-century Roman altar dedicated to Mercury and a graveyard housing tombs dating back to Swabian times and medieval sarcophagi.

Upright on the site of an ancient hill fort, this chapel was built in commemoration of the victory in the Battle of Casal de Eirigo, where the Napoleon’s forces were defeated by local troops in 1809.

The Parish Church of San Salvador, which dates from the 16th century, is to be found in the hamlet of A Eirexe.

The interior contains a number of pre-Romanesque capitals from the original church, whilst a track leads from the outside to Monte Fontebecha, a hillside offering sweeping views.

Nearby to the parish core of Santa Cristina of Campaña is located the Devesa Chapel, a small chapel with a splendid stone cross nearby where they would sit those, because illness or family anger, where excluded from their homes.

This Romanesque Church, from the 12th century contains some valuable 16th century wall paintings. It also contains the relics of its Patron Saint and a free-standing bell tower, because the older one was demolish during a storm.

This parish of Santa Comba de Cordeiro was the birthplace of one of Valga’s most illustrious sons, the scolar and essayist Xesús Ignacio Ferro Couselo, to whom the Galician Day of Literature was dedicated in 1996.

The centre of Cordeiro village is presided by a Baroque church containing an altarpiece and sculptures of great artistic worth.

Formely belonged to a monastery.

Close to the road of Pontecesures-Vilagarcía, the Monte Beiro Viewpoint is a veritable “balcony over Valga” from which visitors can enjoy not only a variety of spectacular views but also its restored windmill from the 19th century, a Woodland Botany Trail and a recreation area.

The riverside beach at Vilarello, located between broad expanses of marshland and riparian woodlands with great beauty and ecological value.

The beach is equipped with a full range of services, including a small jetty, a recreational area with showers for swimmers, a playground and an outdoor auditorium.

Mina Mercedes Lake is a disused clay quarry that gradually was filled with water, turning it into a natural beauty spot.

Its area of 30.000m2 makes it the largest lagoon in Pontevedra province, with a depth of 20 meters.

Around it has a long walkway with green areas and a viewpoint.

In O Souto we can appreciate a magnificent medieval stone bridge over the River Valga, with a little buddle.

This bridge belongs to the Via XIX Roman Way.

Next to a stream that flows down towards Balleas are located the archaeological remains of a necropolis whose oldest tombs are of Roman origin.

At his side stands a stone cross and the medieval remains of the original Church and Monastery of Santa Comba de Louro.

Also remains a glass furnace of the late Roman period.

The parish church of St Mary’s rises up on a hilltop. A gem of Romanesque architecture, it contains several curiosities, such as its square baptismal font, its 18th century Baroque altarpiece and its freestanding bell tower to the rear.

The San Paio de Vilar Chapel is a small chapel of the 18th century.

Late January or early February is celebrated the “Romaría da Candelaria”, a procession in which statues of the saints and an offering of hocks of ham are taken from Santa Comba de Cordeiro Church to San Paio de Vilar Chapel. 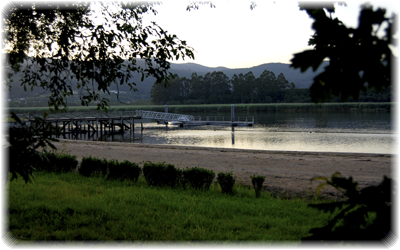