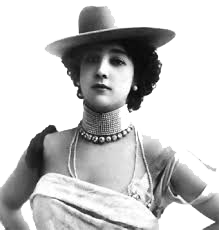 Summary about her life

Born on November 4th, 1868 in Ponte Valga, Bella Otero never thought that she would become such an important character to the xix and xx centuries art world.

Since she was a child, she showed her artistic potential. When she was fourteen, she worked as dancer in Lisbon and then she moved to Barcelona, working in the Palacio de Cristal. At the same time, she makes contact with the high society and meets some artists, as Gaudí. He said that her curves were similar to his draws («breasts like balconies, gargoyles, towers like needles pointing the sky»). Her body was for him «classical Greek organism opposite to the Gothic theological system». Even she could serve as model to the designs of the Sagrada Familia (Enciclopedia de la Emigración Gallega). The relationship between Gaudí and Bella Otero should be very close, as she remarked that she had some draws of him and that she would never sell them.

During her stay in Barcelona, Bella Otero increased her fame and acquired more culture. She met Eusebi, a cultivated Count that taught her about art and behaviour with the aristocracy from Barcelona.

Later, she went to Marseille and then to Paris, which in those years was the capital of Western culture. She leaves with the idea of ​​studying dance. She becomes the star of the Folies Bergere and made performances in the Cirque de Eté. There, Bonafoux (writer and journalist Spanish-French) defines her as "the greatest Spanish woman living abroad " and even served as inspiration for many writers of the time, as Merimee, Bizet, Meilhac and Harlevy .

Bella Otero became one of the most famous characters of the “Belle Époque” and she lived relevant historical facts, such as the proletarian revolution led by Lenin, the beginning of the “Época Azul” of Picasso, the innovation of Isadora Duncan in the world of dance, the arrival of Pablo Iglesias to the Spanish Parliament, the publication of Alma Española by Valle-Inclán and the first steps of Galicia towards nationalism.

Such was his popularity that even Toulouse- Lautrec painted for her a draw in pastel, José Martí dedicated her one of his poems, they wrote for her pantomimes, articles about her in newspapers around the world talking about his career, also describing the outfits she wore. Even the design of cars of the era were inspired by her big hats.

Bella Otero was a feisty woman. She made and promoted herself, to become a dancer internationally known. It was a self-taught artist, because her art was more instinctive than technical. Moreover, people say she was also a competent singer and actress. She performed Carmen by Bizet and plays, such as Nuit de Nöel (Wikipedia, la enciclopedia libre). The Galician writer Luis Seoane described it well in one of his articles: "for us, Bella Otero was always a symbol of grace and beauty of Galicia ".

Marga do Val chose Pontevedra for the presentation of Carolina Otero, as this is the city where the Galician origin of the famous dancer was known. It was Renato Ulloa, back in 1894, who recognized, in the photographs that had Carmen Otero Iglesias in Valga, this young woman who had been portrayed in many magazines on the Parisian gallant environment.

They used to see these publications in the social gatherings held with the Muruais family. "They discovered that Bella Otero was that girl called Agustina that had left Valga, so I thought it had to be here where the book should be presented."

The fascination exerted by this mythical character from the last century was materialized in recent years in several biographies. "I think it's something casual. Otero fascinated me since I was ten when I met a gentleman who had met her in Buenos Aires. Even he kept a lock of hair and many stories. I asked: What has this woman?" says the author.

After years of research in Italy, France or Germany, Marga do Val now has the answer: "In my opinion, the magic of Bella Otero was how she could get from Valga to Paris in the nineteenth century. If Paris was difficult to get, imagine her situation. I think it was a very intelligent woman. Without having gone to school, she came to speak French, English and even say they spoke a little German."

In addition, the book of the Galician writer delved into one of the least documented aspects of Carolina Otero, the actress one. "The fact that she was the first Galician actress and one of the first actresses of the film world was not in any biography. In St. Petersburg she proposed a filmmaker who was taking pictures of the city to record her. Meanwhile, she made ​​a «taconeo» (sound with her shoes). So, she knew that the sound were separate of frames."

Another important contribution is the information gathered from the press. By some articles, including one of Aurelio Aguirre, we can know about her stay in Santiago in 1880 and her constant concern about his mother (she send her from Paris a pension of two hundred pesetas a month). Another newspaper writes about the telephone collapse caused by readers who wanted to know the time that Otero would ride in balloon in Paris, or her failed attempt to meet the Pope.

When she was 96, Carolina Otero died in Nice. She was lying on the floor of the kitchen, while preparing rabbit, "but I wanted to give it dignity. Someone said that there was a gas leak, and I took the opportunity to state that she decided to die that on April 10 ".